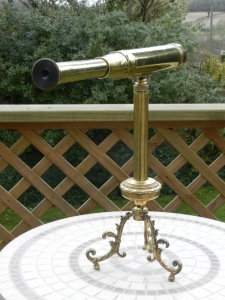 The way I define a Library telescope is that it is mounted on a stand that is intended for being positioned on a table, such that the user can sit in a chair and look through the telescope when it is pointing horizontally. The sort of scope that would be in a bay window in a library, so that the reader can look out and easily use it to investigate the activities of a passing deer or fox on the estate, or see who in the hunt is in the lead. Such telescopes are designed for terrestrial use, not naval, and not astronomical. Pretty useless really, unless you have the estate to view, but they were popular in the 18th and 19th Centuries. They also look really good on a library table.

This is a classic ornate library telescope, made and engraved by P (Peter) Dollond of The Strand, London, which leads to a date of 1760, give or take 6 years.

The stand is brass, with a fixed height of 17”, which puts the telescope axis at 18.5” above the table top.  The tripod legs of this stand have feet that sit on an 8” diameter circle. The brass telescope itself is attached via two knurled head screws into the lower part of the main body, which hold the telescope in a cupped bracket. Overall length is 26” extended, with an 18.5” body: this is 2.5” diameter at the objective lens, which is held in place in a copper fitting that provides the joint between the telescope body and the sunshade. The eyepiece end of the main body tapers down over 3.5” to join to the 1.25” diameter single draw. This draw caries the quoted engraving, and a line to show the typical focus point.

In the photos you will see that the eyepiece terminates in a flat ended brass fitting with a female thread onto the single draw. This fitting is my own addition, as a repair, as the telescope arrived with no lens in the eyepiece, and what appears to be a very long eyepiece fitting, with parts missing, and a damaged lens holder.

Inside the first draw a black internal sleeve, made of what appears to be aluminium, holds a standard two lens barrel, in brass, approx 5” from the eyepiece. 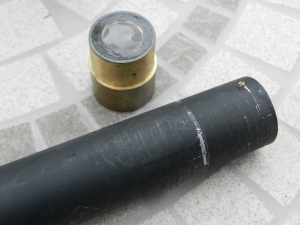 Both these lenses are glued into the ends of the barrel, with black paint covering a significant part of the edges of both lenses. The two lens barrel is held in the internal aluminium tube using a single grub screw. At the eyepiece end there is no apparent method of mounting another dual lens barrel into this aluminium sleeve, but there is a shoulder to stop it entering too far into the telescope draw. It would appear that the second lens barrel would have extended towards the user further, hence the longer eyepiece construction.

The whole original eyepiece lens assembly was difficult to understand, and not of a type seen before, so a replacement sleeve with two sets of lenses in barrels (the first draw from a later Dollond scope) was inserted into this P Dollond telescope single draw (it was an interference fit) and secured in position with the flat end eyepiece cover (from a JH Steward tapered body scope). The colouring of the eyepiece is just right for the rest of the telescope, and the combination of the lenses works brilliantly.

The objective lens is original, and is a dual element construction, with each of the two lenses being considerably thicker than is seen in later telescopes. The optical quality of the lenses is excellent: the lack of chromatic aberration in the resulting image is noticeable!

The big question is, what did the eyepiece look like originally? The only clue is the remaining part that came with the scope, that looks of the same age. This has the remains of maybe another lens holder assembly jammed/screwed inside, with various damaged threads visible. If you know of any similar old models, please let me see pictures!

The second question is, how does the draw get extracted from the main barrel? Nothing on the main barrel unscrews, except for the objective lens holder. The first draw has a shoulder at the eyepiece end, so it cannot be removed through the main body of the scope. It seems it is not intended that it is ever to be removed.

The telescope is obviously very old. The body construction is unusual, with the tapered brass main body, and the stand is very ornate, as in pre-Victorian. The lens assemblies are also unusual, complex, expensive to manufacture, and look a little “one-off”, as if built to fit, after the main outer parts had been finalised. 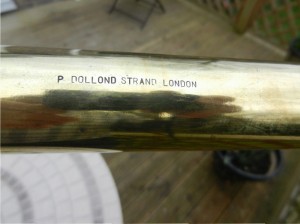 The lens is a dual element, so dates the design as probably after the publication and filing of the Dollond patent, which was in 1758: John Dollond joined his son Peter in their optical business in 1750, and slowly developed the use of achromatic lenses using the combination of the two glass types in a combination lens.

To a collector like me this is brilliant. To use a telescope that was made by Peter Dollond, in one of the first applications of his patent, 250 years ago, even though the eyepiece lenses inside are from one of his Dollond successors, is a real thrill. In reality it is a renovated item, rebuilt, and so the resale value is lower than an original version. But equally it has a good story, and makes a talking point. Plus it works beautifully.

In an antique shop this would be put on sale for £2000+, but the real sale value is probably half that. Why, because if you want one, 250 years old, only a few made, where do you go to find another one?

I bought the original unrepaired P Dollond parts on Ebay in December 2014 for under £80 including carriage. Maybe it slipped under the other collectors’ radars because it was quoted as a non-working ‘Dolland’ telescope. But it shows you can still find gems like this for reasonable prices. So keep on looking! The trouble is there are more and more people looking for telescopes now, so prices are going up, I am having to change my search targets, and specialise…….sometime I am going to have to start selling, the prices are so high.

It’s currently a favourite item in the collection, listed as #226. So that’s 200 at least to sell before I part with this one.

Maybe: This postscript was added 2020 – as reading thru the website I realised often the reader’s comments on these articles are not visible! Basically their comments bring me to accept the conclusion that this is a modern (Indian) fake, confirmed perhaps by some parts made from aluminium found inside! Enthusiasm overcoming logic maybe!