At the National Maritime Museum in Greenwich, in a visit in 1993, I had been disappointed to only find four telescopes on display. One of these was shown in relation to items used by Admiral Nelson, and my notes from the time record it as approximately a 3 foot long oak cylindrical barrel, with one draw, in silver, inscribed “John Pasco, Flag Lt to Nelson” (or words to that effect). The main problem was that this had been polished so much that the engraving was almost lost. Again my disappointment was that I had assumed Nelson would have had his own telescope, but possibly this was not the case, maybe he just expected to be able to use the equipment held available by his officers. So the thought of seeing a telescope that had actually belonged to him was dashed. Unless one does yet exist, of course. 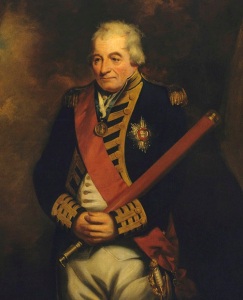 In Summer 2015, in one of those incredible coincidences, I was struggling to read the BBC book “Empire of the Seas” before going to sleep at night. This was Brian Lavery’s book about the Dan Snow programme depicting ‘How the Navy Forged the Modern World’, but it was slow progress. Several of the old portraits of the Admirals and Captains of their times, showed their pose holding a telescope – as a sort of badge of rank.

One that I noted particularly was that of Sir John Jervis, who had a particularly long cylindrical wooden, reddish coloured telescope.

Within a week a review of some telescopes newly offered for sale on Ebay in the UK showed up a single draw telescope, quoted as engraved with the name Captain J. Jervis Tucker: and it looked the same style and colour as the telescope shown in the painting above. So was it possible that the telescope for sale was the one depicted in this painting, now in the Royal Collection? A little more reading identified the fact that Jervis was appointed Earl St Vincent, after a success in a sea battle with the Spanish off Cape St Vincent, a battle in which one of his Commanders, Nelson, had distinguished himself, in 1797.

The possibility of this telescope linking very close to such names was enthralling, so possibly my logic did not quite take account of some slight hitches in the evidence…

The Ebay bid was successful, it was not too expensive, and the dealer was really good: despite the telescope measuring 4 feet 2 inches when closed, it arrived in what the carrier described as the best packaging he’d ever seen, mainly polystyrene foam, 5 feet long. The telescope was very long: so it didn’t quite fit with the one shown in the Earl St Vincent painting, which looks like it was maybe 2 feet long.

So, what date was the telescope: The look and feel was good, it was well built, it had a good dual element objective lens. Definitely post the 1762 Dollond patent date. But when did John Jervis have the rank of Captain? His Wikipedia entry and the National Maritime Museum suggest he achieved the rank of Captain in 1760, after fighting the French in Canada and in the Caribbean as a Lieutenant, but was unemployed from 1763-1769, when he did briefly gain another ship posting. Then from 1775 onwards he fought the French, in America and in Europe. He was knighted in 1782. This would have meant the telescope was engraved sometime between 1769 and 1782. This is very early, compared to the appearance….

Lastly – how did this not come to prominence previously – the signature on the first draw is “Capt. J. Jervis Tucker”. Where did this extra name ‘Tucker’ come from?

From 1796-99 Admiral Sir John Jervis commanded the Mediterranean fleet. From Jan 1798 Benjamin Tucker served as Purser on HMS London, stationed off Cadiz with this fleet. Discharged in July 1798 Tucker became Secretary to Admiral Jervis (now Earl St Vincent) and continued with him throughout his service in the Mediterranean. He was appointed Second Secretary to the Admiralty on 21 Jan 1804 and then again on 10 Feb 1806, when St Vincent was First Lord. He then became Surveyor General of the County of Cornwall.

Born in 1802, Benjamin’s son was christened John Jervis Tucker, and entered the Royal Navy in 1815. On 15 Jun 1827 he was promoted to Commander, serving on HMS Ariel and HMS Semiramis (1828-1831), and then to the rank of Captain of HMS Royal William on 28 Jun 1838. From 11 May 1841 to 26 Mar 1845 he served as Flag Captain of HMS Dublin in the Pacific, under Rear-Admiral Richard Thomas, dealing with the imposition of French administration on the island of Tahiti. Royal William was a fully rigged 120-gun first rate ship of the line – similar to the Victory.

A replica of the figurehead of this ship has recently replaced the original, which stood beside the dockyard at Mutton Cove, Plymouth: this is shown above. The figurehead was always known as King Billy, for William IV, who reigned between 1830 and 1837.

So JJ Tucker held the rank of Captain from 1834-57, dating this telescope probably to around 1834: this fits a lot more closely with the visible aspects of the construction!  Nevertheless the scope had an interesting life, seeing both Tahiti and Sheerness!

There is no maker’s mark, the only info is the engraving on the first draw. The objective OD is 3”, with a visible used diameter of 2.3”. The carrier is very well machined and engineered, the threads move easily that retain the lenses. They have a greenish hue. Two of the three grubscrews attaching this assembly to the wooden barrel were still in place. The only snag was they
needed new holes into the wood of the barrel (they are not yet replaced in this photo). 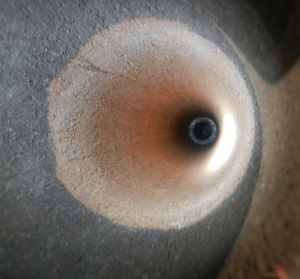 The barrel appears to be drilled out inside, to two fixed bores, with a metal optical orifice half way along. The bore is blackened for only about two inches away from the objective lens. The photo here is taken using a torch beam, and shows the distant copper orifice.

Outside, there is a taper evident on the barrel to meet the large objective. The surface of the mahogany is varnished to a dark red colour, a bit scratched but not cracked or damaged. There are two positions, one half way along, and the other near the brass collar near the eyepiece, showing signs of having been in a strap mounting or other retaining clamp, presumably on a stand: otherwise the operating length, at 4 feet 9 inches, would make it unwieldy for hand holding. 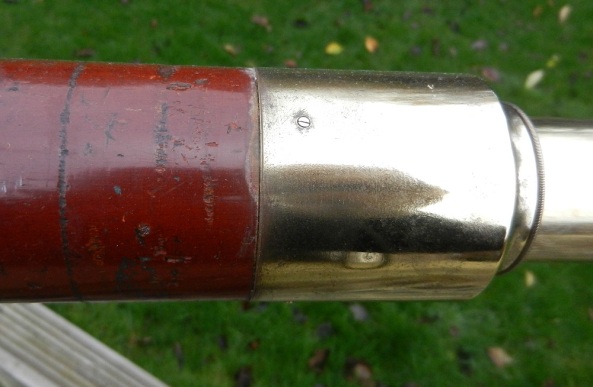 The brass fittings and eyepiece took many hours of polishing to return them to a shining brass surface – see the original corroded condition shown below. The lens carriers in the single draw are very well made, as is the main joint at the collar on the end of the barrel. The eyepiece is squared off, and flat-ended, with a captive sliding cover that still is operational. The scope has a high magnification, and as might be expected a very narrow field of view: the positioning of the eye against the eyepiece is fairly critical – there’s a word for this, which I will look up, it has a narrow diameter exit cone for the viewer.

On receipt, the telescope looked like this – photos from the Ebay listing:

An exciting chase to find the answer, and it turns out the owner, a Captain in the Pacific on a first rate ship of the line in the Royal Navy in the 1830s, was named after his boss, an Admiral that his father respected a great deal, so that he christened his son after him. This previous Admiral had also been in charge of the young Commander Nelson, in the late 1780s, going up to Trafalgar. The scope still has a good history, and is still a unique memento of those times on sailing ships.

I recently came across a Player’s Cigarette card depicting the figurehead from HMS St Vincent, which is fairly obviously modelled on Earl St Vincent. I can’t relate this figurehead to any of the four ships and three shore establishments who have taken this name, but the most likely is the Nelson class first rate ship of the line, 120 guns and 3 masts, launched 1815. (Ed. Aug 2016)

By the way…..NMM telescopes on display

The other three telescopes I could find in the 1993 visit to Greenwich were: