This telescope was a nice surprise for me, as I bought it as a multi-draw with an interesting covering on the barrel, reminiscent of the baleen covering used in Victorian times. It was advertised on Ebay as a five draw pocket-sized scope in a cardboard case, lacking an objective cover.

The impression on first inspection was that the objective end of the scope had a cylindrical ring round the lens carrier brass section, with four expansion slots – the type used on a slip-over end-cap. It looked like the end-cap sliding side section was stuck on there, with no actual end-cap. Sure enough with some force the side cylindrical section pushed off the objective lens mount.

Looking inside the telescope case the end cap appeared to be stuck down at the bottom of the case. It did not take too much to push this out of the case, and it was then ‘Super-glued’ (rather than soldered) onto the side cylindrical section, to reconstruct the end-cap. 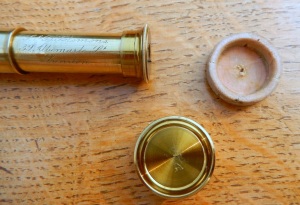 Also inside the case was a soft cushioned end piece, which fitted the eyepiece end of the telescope – so obviously this part of the case was meant to accept the eyepiece, rather than the objective. On the back of the cushioning the words forming the remains of some writing were in French, so along with the appearance of the scope this convinced me that the telescope was actually a French design, probably sold in England. Because it is such a small pocket telescope version, you assume it was sold to a country gent, to be carried in his pocket.

The disappointment was that the telescope did not work properly, so it needed to be dismantled to see the problem. As with any multi-draw scope, say with 5 draws or more, the focusing eyepiece covers the lengths of the first two draws: so there is one cartridge in the first draw, mounted from under the eyepiece cover, plus a second cartridge carrying one lens at each end, mounted in the objective end of the second draw tube. 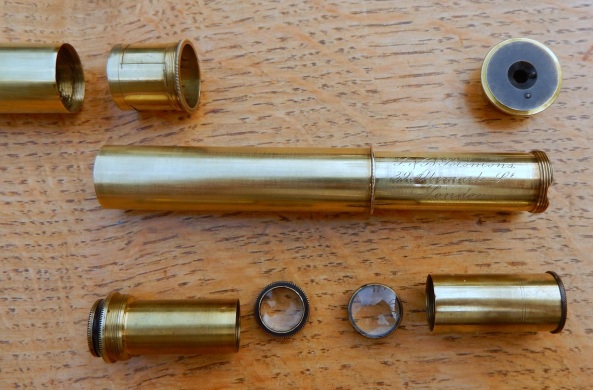 I now have to decide whether to file down the knurling on the lens assembly to sort out this problem. It seems a valid adjustment, and the protruding shoulder (at the right hand end of the left hand lens cartridge in the above picture) has no function. The inner lens mount of the opposing cartridge is the same as the OD of the cartridge: this one is a sliding fit inside the first draw.

Engraved on the sixth draw!

Even more interesting was that there was a supplier name engraved on the first draw, which was “S & B Solomons, 39 Albemarle St, London”. The Solomons were opticians and spectacle makers, and accepted London suppliers of telescopes and microscopes: it is possible that this was an imported French-made pocket telescope, brought in to provide their ‘Landed Gentry’ customers with impressive pocket-sized devices. Albemarle Street is off the Strand in Central London, and Samuel and Benjamin Solomons were operating there from 1840 to 1875, throughout the early Victorian period.

Once this lens is repositioned, the telescope works extremely well, particularly for such a small device. The OD at the objective is 1.125”, the fully open length 15.5” and the closed length only 4”. 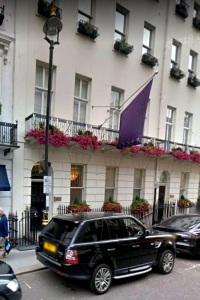 The premises of S&B Solomon are now sited next to Browns Hotel, in a fashionable part of Mayfair. The picture is from Google, with the house behind the Chelsea tractor.

What about the barrel covering?

The basic original query – as to what the barrel is covered with – remains unexplained. It looks and feels like plastic moulded basket weave. Indeed its construction appears to be that of a woven cane, treated with some black varnish or resin. 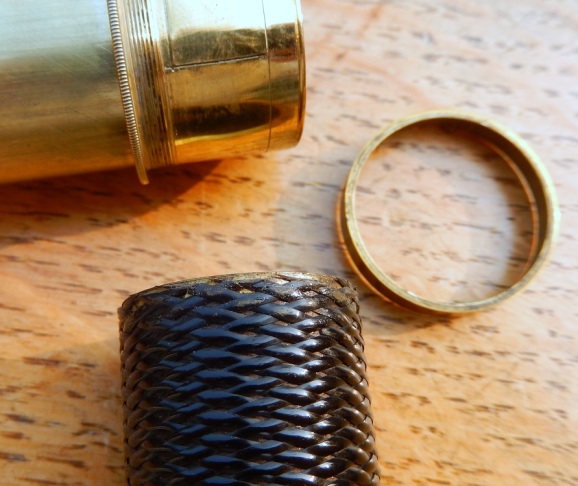 The ring covers the ends of the weave, this one held in place by the retaining flange at the end of the sixth draw.

Accession Number 286. This telescope is now for sale, fully working, priced at £185 sterling.