Thompson of Yarmouth. Not a name that has been echoing round the walls of Observatories or Navigators clubs for 200 years, but I found this telescope interesting, so bought it.

Why buy this one?

The reason was because it’s a classic three draw with a mahogany barrel, plus a decent authentic (ie original) case, and the original screws are present on the barrel mountings. Plus it came from Great Yarmouth, where my three (maiden) Great Aunts lived, (all daughters of a WW1 Norfolk farmer, born around 1900) – but they did not date quite as far back as the telescope, as Gloria Clifton says Simon Thompson was working there in (Old) Broad Row from 1804-16 and 1830-44. So these dates tally with the style and design of the scope, and it looks a good quality item. Plus it was said to work properly, which it certainly does, and it works well.

On arrival it looked fairly dull, and looking rust-coloured on the largest draw. It cleaned up surprisingly easily, as the pictures show, and everything was present inside – AOK in terms of lenses and other bits. It is not that used/dented, and is nicely finished. Going back to Clifton, she mentions that Thompson was a compass maker, brazier, and a telescope tube maker, as well as an Optician/optical instrument supplier. So presumably he supplied other telescope makers with tubes, and so had plenty of contacts to source the lens sets from. Not that I am aware of many other active optical instrument manufacturers in East Anglia.

The case as well

The case is interesting: it is certainly a paper/card tube, with leather end caps well sewn onto leather wrapped around the end of the tube. The interesting part is the covering over the paper tube, which looks like a brown fish-skin of some form. Under the cap (a slightly larger tube) the inner part of the case under the cap is lined with a paper covering having some form of coloured pattern, but it is difficult to define what this is. (See comments below- Ed).

The seller said the telescope was a present to him from his Grandmother: presumably it was passed to her from a male relative who was a seafarer, either as a profession or as a hobby, in late Victorian times maybe. But no real history is known. 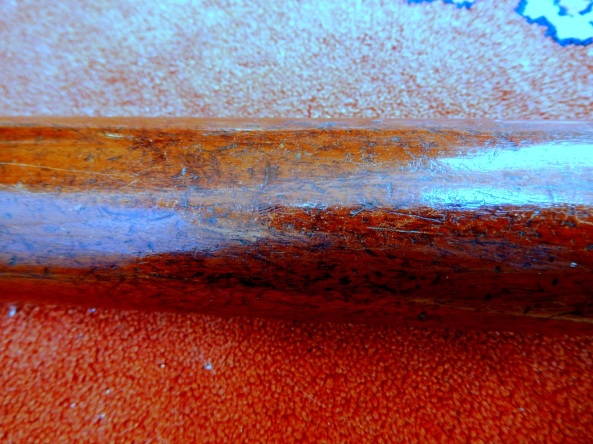