This is a telescope by Troughton and Simms, a famous British maker: the name is engraved on the first draw. But equally, as they worked in London over a long period, from 1826 until 1915, it is therefore difficult to date.

In 1788 Edward Troughton came to London from Cumbria, where his father was a farmer, to be apprenticed to his brother John, a scientific instrument maker based at 136 Fleet Street. When John retired in 1804 Edward took over the business, but around 1826 formed a partnership with William Simms, at that same address.  The business became known as Cooke, Troughton and Simms in 1915. This model is likely to date from very late Victorian or Edwardian times, judging by the design and the silver-coloured nickel plating.

Indeed the design is very unusual, in that it has a single draw, from a short barrel. The single draw has a split half way along, which gives access to the second lens cartridge.  The lens quality is what you would expect from such a maker.

Indeed the objective shows the normal greenish hue of Victorian scopes.  The focus is interesting, the first draw has to be pushed a long way home to bring a sharp image for a long distant object but this has an advantage, in that the telescope can focus on very close objects too, around 2m or 6 feet away.

The other real advantage is that the brass body of the scope is plated with presumably a nickel plating, which looks silver.  This does not tarnish like the normal brass used on telescopes, so your hands stay clean and there is no polishing required: I have had this scope for over ten years and it has only ever needed a wipe over with a soft cloth, to keep it clean. 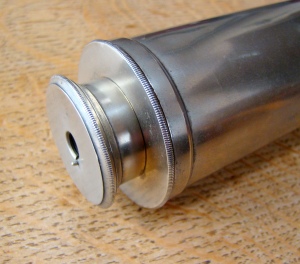 really conclusions, more guesses! (1) I think this scope dates from the 1880s-90s. (2) It was probably built for, or aimed at, the professional Gentleman’s market: – the man who was a Surveyor, or Landowner. Reasons here are that a military one would not be coloured silver, at least without any leather cladding. A naval one would be bigger when closed, and longer when in use. The silver colour makes it try to show quality. The only drawback here is the size, it is hardly a pocket sized telescope!

This telescope was sold in 2018, to a current member of the Simms family, descended from the William Simms who set up this partnership in 1826. It was my reference #96, originally acquired in 2004.