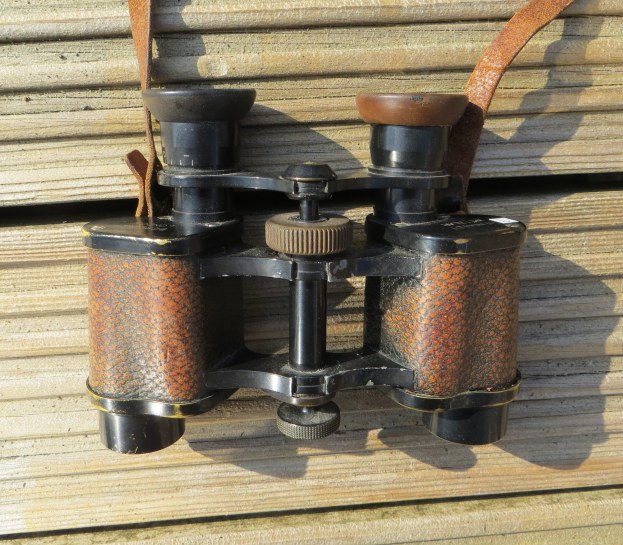 OK, not really a telescope, but German Hensoldt binoculars

These Hensoldt Wetzlar binoculars were acquired in 1993. At that time I had just started this new passion, acquiring and analysing optical instruments… My son, at 19, had a Saturday job at the Rod Box, a fly fishing equipment shop in Kingsworthy, near Winchester, and one of his workmates, aged over 70, another fly fishing advisor and salesman in the shop, had some interesting binocs, 8 x 30. He had bought these binocs in a shop in Parchment Street, Winchester, in the 1950s, but was interested in parting with them, if they could be replaced by a good modern pair.

The deal was done, my son swapped some modern Praktica sport binoculars, from Argos, for these old, unknown and uninspected binoculars, for me. When they arrived, they appeared really neat, small, military style field glasses, very like the ones my Dad had in Burma in WW2 – which I have never found. Much fingered and worn on the leather, but not showing any signs of wear or damage.

Marked “Hensoldt  Wetzlar” on one side, and “Berlin & London” on the other, the base had “Sterior” marked on the centre focussing end stop. But more interesting, on either side at the base the inscription/engraving reads: “Baron Dimsdale” on one side, and “Meesden Manor   Buntingford” on the other. Plus some original, possibly military data markings, engraved on the lower end-plate, reading “N. S. L.  G167”.

There are other marks, internally: the lens units are stamped 174, and the prisms 271. There is an original factory serial number stamped under the focus bar, which says 1l963: this appears to be the normal place for Hensoldt to mark serial numbers. The second digit looks more like a plain stroke than another figure “1”.

It is perhaps relevant to set the scene for what follows, to suggest that these binoculars probably date from the early 1900s. The markings showing “Berlin & London” suggest that they were produced before WW1. The only ownership information evident is on the leather case, which has an imprint on the base that looks like “Rabjohn  SM”.

An enquiry to Cambridgeshire CC Libraries found that, despite Buntingford being in Hertfordshire, they were able to tell me that several sons of Robert, Baron Dimsdale, attended Cambridge Uni: one, Charles Robert Southall Dimsdale became Baron in 1898, but died in 1928. He was actually the last to live at Meesden Manor – he was succeeded by his son Edward Charles, and then his son, Thomas Edward Dimsdale. A letter to Meesden Manor in 1995 gained a response from Wilfrid Dimsdale, son of Thomas Edward.

The family is descended from Thomas Dimsdale, an MP and Doctor, who went to Russia in the 1760s, in order to inoculate Catherine the Great’s son against smallpox. The results were a success and Catherine rewarded Dimsdale with £10,000, a pension of £500 per annum, £2000 expenses and a Barony of the Russian Empire.

Meesden Manor was not quite so fortunate. It was acquired by the family in 1833. In the 1900s Thomas Edward was a regular Army officer, serving in India prior to WW2. During the war the area around the house was requisitioned for use as a camp for delinquent allied soldiers, mainly Americans. The house was not used for such, but in 1944 a V1 Flying bomb, aimed at London Bridge, missed, and hit the house. It was finally demolished after the war.

These are honestly the best conventional binoculars I have ever had the opportunity to look through. They are light, easy to separate and use, and the two images can be separately focussed. They are almost as effective as the Canon image stabilised unit I have now acquired.

The objectives have a clear diameter of 24mm. Marked on the body is presumably the magnification, which is X 8.  The glasses undoubtedly had to have been acquired by the late Baron, who died in 1928: but because of the Berlin & London marking on the body, by the manufacturer, they must have been produced before the start of WW1, somewhere between 1900 and 1914.

Note that they have no stylised trade marking, the words “HENSOLDT WETZLAR” are engraved in normal caps.

These binoculars are currently being offered for sale on Fleaglass.com