Dollond tapered mahogany barrel telescope, with the draw tube split at each lens mount joint. Flooring squares are 12cms each.

This Dollond telescope has an apparently mahogany, tapered and polished wooden barrel, and a single brass draw. It is fairly big, the wooden section is 24.5”, the single pull extends to 14”. The wooden taper has an OD of 1.675” at the narrowest, and 2” near the objective lens. Interestingly, the internal bore of this barrel is drilled out in two sections, a narrow bore towards the eyepiece, and a larger bore close to the objective: between the two there is a narrow orifice, which is a fairly normal feature in telescope design. But the wood inside the barrel looks more porous and fibrous than a hardwood, and lighter in colour.

Eyepiece cover detached from the bell end eyepiece. Also the tube is unscrewed partially at the mounting point for the second eyepiece lens.

At the objective the OD is 2.5”, with the lens showing 1.675” of glass. The objective has a sliding brass plate as a lens cover, as does the eyepiece. In fact if the eyepiece lens cover is unscrewed, ie removed, the eyepiece is a classic bell shape, much more attractive, and much more easy to use – otherwise the slider frequently pokes the user in the nose.

The construction of the single draw is in four separate sections, all the same diameter. Each joint has a support for one of the four lens elements of the eyepiece construction. The separation of the third and fourth lenses is larger than normal, maybe they were just optimising the spacings in the late 1700s. Because this is a telescope dating from the end of the 18th Century. 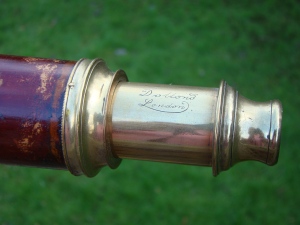 The French polish is worn away at the finger hold points: also the eyepiece lens cover is removed here, to make for easier use.

The engraving of the name, Dollond, and London, here is on the left side of the telescope, on the first draw. When the naming moved from the telescope end to the side of the first draw, I believe at first it was on the right hand side, ie with the D at the start of Dollond closest to the eyepiece. But the engraving is small and neat, with swirls, perhaps paralleling what was originally done on the end covers. It looks older in style than the later telescopes used.

The telescope was bought from R W Robinson, compass adjuster, from his shop/premises in Hamble, in March 2000. He quoted it as 1770-1780 in date, because of the style of the eyepiece and objective, and of the type used by ship’s Masters. The reason for this I think goes back to the light body, making such a long telescope easy to use when freely hand-supported on the rolling bridge. It is certainly well balanced in use, so a pleasure to work with, particularly for spotting aircraft.

This was number 58, bought many years ago, so the collection was accelerating. Purchase price was very high for me at the time. What is it actually worth on the market? Probably it would need the French Polish redoing, to smarten up the barrel, which would put the retail value up to above £2000. My selling price would be £1200.

In this photo, of the objective end of the Dollond, the  cover slide is open as it would be in use, and sticks out to the side. If you are looking at aeroplanes in the sky, you can use the slide as a marker on the aircraft with your other, non-telescope eye, to locate it through the scope in the telescope view.  I have used that technique since 1961!